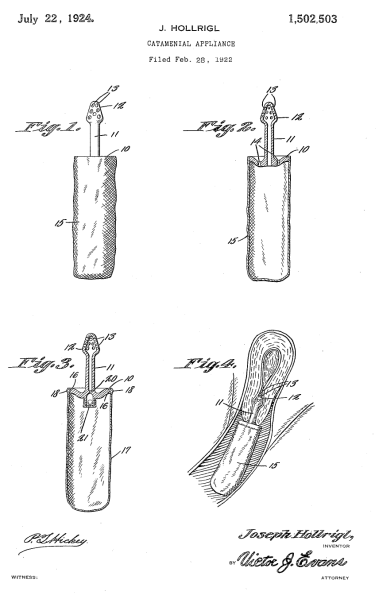 This (rather scary looking device) is designed to be partially inserted through the cervix into the uterus, to absorb the menstrual flow. There is reference to using a speculum to insert the device, which does not seem very practical.   The description says that the item should ideally be used once and thrown away, but later goes on to say that in figure 3, the stem could be made from metal and be reusable.  That version would also contain a ball-valve, preventing the blood from flowing back up the stem.  The collection bag for the reusable version, appears to be disposable.

To all ‘whom it concem:

Be it known t at I, JOSEPH Hommel., a citizen of the United States, residing at Manchester, in the count of Hillsborough and State of New Hamps ire, have invented new and useful Im rovements in Catamenial Appliances, of w ‘ch the followlng is a specification.

‘ This invention relates to surgical devices, particularly to catamenial appliances, and has for its object the provision of a device desi ed to be inserted within the cervix of t e uterus f’or the purpose of catching and retaining the menstrual flow whereby to eliminate the use of the ordinary sanita appliances such as belts, na kins, pads, arid the like, which are common y provided for absorbing the discharge.

An important object is the provision of a device of this character which, when properly inserted, will positively prevent any leakage onto the garments or person of the wearer, the device consequently obviating much. of the annoyance experienced by women during their periods, the device being furthermore sanitary and not injurious to health.

An additional object is the provision of a device of this character which will be simple and inexpensive in manufacture, easy to apply, eliicient and practical in use, and a eneral improvement in the art.

ith the above and other objects and advanta es in view, the invention consists in the etails of construction to be herenafter more fullyT described and claimed and illustrated in the accompanying drawings in which- Figure 1 is a side elevation showing one form of the device.

Figure 3 is a longitudinal sectional view through a modified form of the device.

Figure 4 is a view of the device in position within the uterus and vagina.

Referring more particularly to the drawings, I have shown my device as comprising a cup-shaped member 10 which may be formed of hard rubber or the like, it being preferable that an inexpensive material be used as it is intended that this form of the apparatus be used once and then be thrown away. Formed integrally with or rigidly secured to the center of the cup is a hollow stem 11 which has its free end enlarged to define a head 12 formed with a plurality of perforations y13. The cup is provided between the stem 11 and its rim with a plurality of perforations 14, for a purpose to be described. Firmly secured to the rim of the .cup is a flexible soft rubber bag l5 which 1s elongated and which has a rein- .forced bottom and sides to prevent collapsmg. This form of the device is intended to be used once and should therefore bc rather inexpensive with no for any possible removal o the cup, the structure being as cally in Figures l and 2.

In Figure 3 I have shown a somewhat modified form in which the cup-shaped member and the hollow stem may be formed of non-corrosive metal and constituting the permanent portion of the device which is designed, in this insta-nce, to be used over and over, the material being such that it can be readily cleansed and kept sanitary. In this type the cup-shaped member is provided in its periphery with a groove 16 and a soft rubber bag 17 is associated with the cup and held thereon by means of an elastic band 18 which is formed integrally upon the open end of the bag and which is snapped into the groove 19 in the edge of the cup. In this form of the device the perforations 14 mentioned in the first described form are eliminated.

An important adjunct to this modified form is the provision of a valve seat 2O at the juncture of the stem with the cup and this valve seat has cooperating therewith a ball valve 21 which is designed to close When the appliance is yremoved from the body so as to prevent the accumulation within the bag from passing out through the stem.

Regardless of which form kof the device is used, the employment or insertion thereof is the same, that is the device is inserted through the va ina and up into the uterus rovision made the bag from shown specifi so that the per orated head will be located at the source of the menstrual flow, as shown in Figure 4. In accomplishing the insertion it is probably necessary to make use of a speculum which might be an of the well known type. After the device as been inserted to the proper point in the body the introducer is removed whereupon the flexible bag will occupy va position within the vagina and of course below the cup 10. The How will enter the perforations in the head llt from soiling the person or garments of the user. In the second ,descri’bed form, that is the form illustrated in Figure 3, it will be’ apparent that after use the bag may bere- Vmovedand thrown away and the cup and associated parts be cleaned and sterilized so that when a new bagv is applied -to thecup the devicemay beused repeatedly.

From the foregoingy description and a study of the drawings it willbe-apparent that have thus provided a simply con-l structed and consequently inexpensive device which is well adapted for taking care of the ‘discharge at the menstrual period so as to eliminate the use of objectionable pads and l other equivalent devices. Owing to the simplicity it is apparent that there is nothing to get out of order and that the device should consequently have a long life and satisfactorily perform all the functions for which it is intended.

While I have shown and described the preferredembodiment of m invention, it is of course to be understood lt at I reserve the rightto make’.y Such changes in the form,

construction and arrangement of parts as will notdepart from the spirit `of the invention or the scope of the subjoined claims.

What I claim isz- 1. A device of Ithe character described comprising a’cup member7 a hollow stem carried thereby and having a perforated head, and a flexible bag connected with said cup member, said cup member havin its Aupper surface concaved and formed with a pluralityv of perforations. I

2. A device of the character described comprising a cu likev member, a flexible bag engaged with t e periphery thereof, and a hollow stem projecting outwardly from the center of sai cup like member and terminating in an enlarged hollow conical head rovided throughout its area with a plurality of perforations.

3. A device’ of the character described comprising a cup like member, a `iiexible bag engaged “with the periphery thereof, and a hollow stem projecting outwardly from the center of said cup like member and terminating in an enlarged hollow conical head `provided throughout its area with a plurality of perforations, the juncture of thehead with the stem defining a substantial shoulder adapted to engaged by the tissue of the uterus for preventing downward displacement of the device.

In testimony whereof I aiiix my signature.